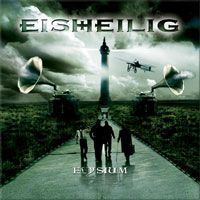 Many people among our faithfull readers asked why a so lame review for a band that maybe didn't deserve such treatment (i'm talking about the french one). Well, to answer this question is to share with you a great part of all my writing process, and i fear you won't learn much more about the music itself if i do. Actually, i did wrote a review. I don't remember ; it was around fifteen or twenty lines... But the more i was listening to the album, the more i had to deal with the great difficulty i encountered at trying to speak about their music without saying a single word about their references. From start to finish, from "Sturm" to "Morgenrot", the Rammstein influence was way too obvious. So, while typing, reading, erasing and retyping again those words i felt it was completely silly and useless. And i finally decided that the best way to describe "Elysium" was to put quite simply what it was all about. End of the story. A pity this translated review doesn't have the bitchin' humor of the original one. But, hey, i didn't had much fun at listening to the album in the first place.